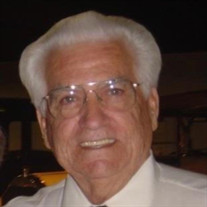 Charles Houston Mefford (aka Carl) was born in the Appalachian mountains in Ky to a coal mining family. He was mechanically inclined and a self-taught auto mechanic. His love for fast cars led him to the speedways (where he was known as “Gunner”) which became his passion for decades. He made lifetime friends and created amazing memories with his children at the racetracks. He said he worked hard so he could play harder. He was such a bigger than life character. He was loud, and funny, and had such a charisma. He absolutely loved to tell a joke. Usually not a scripted joke, just an off the cuff remark that would make you laugh or embarrass you, and usually get an “Oh Carl” from his wives Ana and Diane because they weren’t always socially correct. He married his wife Ana in 1958 and they were married for 31 years. Together they had 3 children (Chuck, Tami & Annie), 4 grandchildren (Lee, Leanna, Crystina, and Brad) and 4 great grandchildren (Matthew, Maleah, Tyler & Ryder) as well as the extra blessings of Denise, Herman, Larry, Lindsay, Shaun, Lyndsay and KC. He was then gifted with his second wife Diane and they shared 25 years together. He loved to travel and made an annual trip back to his home in Kentucky to see his family. He is survived by his sisters Effie Nipper and Jewell Enis as well as many nieces and nephews. He loved and protected his family and created a legacy that is beyond strong in their love for one another. His favorite times were spent traveling, camping, and barbequing with his children, with his grandchildren, and with his great grandchildren. He taught us that if you fight you also have to forgive, and that the only love greater than that of our family is that of our savior. He was beyond protective of his family. Nobody was ever going to disrespect or hurt someone he loved. He was fierce and strong and yet a gentle teddy bear. He had a tough façade, and his voice was loud and strong, but inside was the most kind and gentle and loving man. He loved Jesus and was raised in a Pentecostal home and was a member Temple Baptist for several years. He loved Jesus and made his final journey home on January 2, 2021.

Charles Houston Mefford (aka Carl) was born in the Appalachian mountains in Ky to a coal mining family. He was mechanically inclined and a self-taught auto mechanic. His love for fast cars led him to the speedways (where he was known as... View Obituary & Service Information

The family of Charles Houston Mefford created this Life Tributes page to make it easy to share your memories.

Charles Houston Mefford (aka Carl) was born in the Appalachian...

Send flowers to the Mefford family.