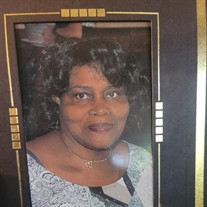 Eleana Astocia Garner was born on October 31, 1954 in Bryan, Texas to the union of Clara Elizabeth Barnes and Earley Barnes, Sr. Eleana was the first-born girl of six siblings. Her parents, brothers Melvin Barnes, Tommie Van Barnes and Sisters in Law, Linda Duncan, and Paula Gardley-Barnes preceded her in death. From her union with Curtis Lee Garner, Eleana was blessed with three children Veronica Garner, Tonya Garner, and Curtis Garner and six grandchildren, Kumonee Garner, Jamisha Hall, Patrick Garner, Charleston Garner, and Cameron Garner. Eleana relocated to Northern, California in the late 80’s. In 2003, Elena moved her daughter Tonya and her youngest grandsons Charleston and Cameron from Bryan, Texas to California to be with her. Eleana took great pride in helping to raise her grandchildren. Eleana was a great grandmother and role model for her grandsons. She accepted Christ at an early age and she made sure that her children and grandchildren had a strong foundation in the church. She raised her grandsons at True Love Baptist Church where they were baptized and she introduced them to Christ at an early age. While a member of True Love Baptist Church she sang in the choir, cooked meals for various programs, and volunteered for other church related activities. She was also an active grandparent and very involved in her grandsons education. She volunteered her time at the school that they attended including Laurel Creek Elementary School where she served as a crossing guard and she was a loyal member of the PTA (Parent Teacher Association). Eleana learned to cook for her family at an early age and she was an amazing cook. She enjoyed cooking delicious soul food meals for her family and close friends and when her family and friends were invited to her home for a meal they knew that we were in for a special treat. Not only was the food delicious but when she hosted the family gatherings she created a fun family atmosphere that her family and friends always looked forward to and enjoyed. Elena’s other hobbies included nurturing a collection of plants, collecting African Artwork paintings and sculptures, and collecting various pieces of different decorative items in various colors. Eleana was a people person and she had no problem talking to and meeting new people. She was a cheerful, funny, motivational woman, and her family was very important to her. She always kept her family and friends laughing and she would not bite her tongue for anyone. If you asked her opinion, you could always expect the truth. Eleana leaves to cherish her memory, her children Veronica Garner (Dwayne), Tonya Garner, and Curtis Garner, her sister, Terry Williams (Arthur), her brothers Henry Duncan, Excelser Duncan ( Mary), Earley Barnes Jr., her Sister-In-Law, Sheri Barnes, her grandchildren, Kumonee Garner, Jamisha Hall, Patrick Garner, Charleston Garner and Cameron Garner, her nephews Anthony, Tony, Henry, Kevin, Lil Duncan, Derrick and Melvin Jr., her nieces Simone, Jackie and Sherry along with a host of cousins and many friends. Eleana will be truly missed by her loving family and friends. Our family wishes to thank you all for your prayers, sympathy and kindness. God bless you all.

The family of Eleana Astocia Garner created this Life Tributes page to make it easy to share your memories.

Send flowers to the Garner family.