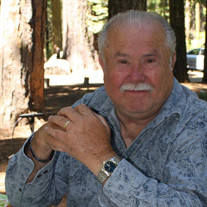 Obituary for George Raymond Kramm On January 5, at 12:45 am the world lost an incredibly special person. George Raymond Kramm passed away peacefully and went through the veil and reunited with his loved ones. Our father lived a good life with many challenges. He was born August 21st, 1934 in Bialystock, Poland. He was born to, Nicholaus and Louise Kramm. During his childhood he was forced to grow up early as he and his family were put into labor camps during WWII. Dad understood what it was like to have his freedoms taken away. His family was liberated in 1945 and emigrated to the United States. On March 15th ,1949 at the age of 14 He and His family came to America abord the General Sturgeon through the Port of New Orleans. His family was sponsored by a cotton mill in Joanna South Carolina. This was where his family worked, and Dad grew up. He graduated High School in 1954 and enlisted in the Air Force at the age of 20. He served his country 26 years active duty and 8 years in the reserves. He spent the first short part of his career as Air Police in Tinker Oklahoma. He was then transferred to Travis Air Force Base in 1965 and finished out the remainder of his career as a Load Master with his highest rank of Master Sergeant. Dad spent one year during Vietnam flying missions lighting up the night sky. They were nicknamed the Candlesticks. Dad worked and flew on C-130 Hercules, C-141 Starlifter, and the C-5 Galaxy. Total of 34 years Dad served his country that had given him so much. He loved America and the freedoms he was given. Dad settled down in Fairfield Ca. when he came to Travis and met his Wife of 54 years. Janice Katie Lund. They started their family and had two beautiful children. Dad continued his career after his retirement from the Air Force on May 1st, 1981. Dad worked for himself, was self-taught in construction and built many room additions, tile floors, tile and bathroom remodels, cement work and poured many patios, He worked for a few years at Anheuser Bush Plant Maintenance. He later worked at Mare Island in 1987 as a painter. He worked painting the inside of submarines in very tight quarters. With the close of the Navel Base in 1990 Dad took work with United Airlines Maintenance Base in SFO. He finished his career at United Airlines where he worked Plant Maintenance first as a painter and later in the carpenter shop. His last few years he worked in the container shop building containers to fit the many aircraft parts. He retired with 11 years at United at the age of 67 on November 8th, 2001. Dad loved to travel and be outdoors. He would take us often to Bodega bay and Lake Tahoe. He would take us camping and fishing, we would go tubing down rivers, swimming, Hiking, skiing, boating. He loved life and enjoyed what it had to offer. We went on many beautiful family trips. Mom and Dad were able to take a couple trips cross country in their new motorhome. He was always on the go and never slowed down or looked back. We were fortunate to have such a loving and caring father that gave everything for his family and those he loved. Dad was a loving husband, a good father, and grandfather. He was an active member of The Church of Jesus Crist of Latter Day Saints and was sealed to his wife and family in the Oakland Temple and believed that life is eternal, and we know that he was reunited with his wife, family and friends that have gone on before him. A grand reunion. My father taught us much and gave his family a good life. He showed us how to have compassion and be in the service of others. He was strong and loved his family, friends, and neighbors. We will miss him dearly, but know he is in a better place. His last few years gave us the opportunity to serve our father and help him with everyday life. He was strong and gave much and we can only hope the be half the man he was. He has big shoes to fill! We love you dad, until we meet again. “Take It Easy, Take It Light.” He is survived by his brother Bogdan Kramm and his wife Phyllis, His daughter Kimberly L. Herring, and her son and his grandson Nathaniel B. Herring, His son Jeffrey G. Kramm and his wife and daughter in law Gina L. Kramm, He is preceded in death by his wife Janice K. Kramm. His Father Mikolaj Kramm and Mother Jadwiga (Radziwinowicz) Kramm, His sister Katazyna Kramm, and son in law and husband to his daughter Steven B. Herring Funeral services and interment with military honors will be private with a small group of close family and friends due to the pandemic. His final resting place will be at the Sacramento Valley National Cemetery. Funeral Services will be held at the Fairfield Funeral Home at 9am Thursday January 21st, 2021. Interment will be held at the Sacramento Valley National Cemetery at 11:30am Thursday January 21st, 2021. The family will be holding a small open house/reception at the residence of Jeff and Gina Kramm.For close family and friends Observance of George R. Kramm Life This event will be held on 01-21-2021between the hrs. of 1:00 pm – 5:00pm respectively.At 473 Corte Majorca, Vacaville Ca. 95688 Refreshments will be provided

Obituary for George Raymond Kramm On January 5, at 12:45 am the world lost an incredibly special person. George Raymond Kramm passed away peacefully and went through the veil and reunited with his loved ones. Our father lived a good life... View Obituary & Service Information

The family will be holding a small open house/reception at the resident of Jeff and Gina Kramm. For close family and friends Observance of George R.

Send flowers to the Kramm family.