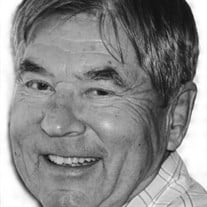 Gerhard Karl Berger passed away peacefully at his home on January 4, 2021 after a brave battle with lung cancer at age 86. He lived a full life as a loving husband, father, and grandfather. Gerhard was born to Karl and Maria (Kubessa) Berger on January 17, 1934 in Germany. He was the oldest of four children. After World War II, at the age of 18, he left Germany to come to the United States. Trained in Germany as a machinist, he started working in St. Louis, Missouri with his uncle. He learned English, became an American citizen, and joined the Air Force. His 26-year military career followed along with aviation history. He worked as a mechanic on the C-47 and C-124, as a flight engineer on the C-133 and finally on the C-5A Galaxy, the world’s biggest aircraft at the time. Flying was his greatest hobby. He earned his commercial pilot’s license and flew as often as he could. When he retired from the Air Force, he earned his Associates Degree and worked as the Chief Technician on an offshore oil rig with Exxon. He is survived by his wife, Huberta; his sister, Gertraude Berger; his daughter, Paula Hall, her husband, Kevin, and her three children, Nicholas, Christopher, and Kate; his son, Thomas Berger, his wife, Katherine, and his three children, Charles, Sophia, and Simon; and Noel Karlene and Gabriel Moseley, the children of his predeceased daughter, Julia Berger. He is preceded in death by his parents, his two brothers, Hubert and Karl Johannes, and his daughter, Julia. Gerhard was beloved by his family and friends and will deeply missed. He always had a kind word or a joke for a friend or even a stranger. He loved to make people laugh and brighten their day. He was an active member of Our Lady of Mount Carmel Catholic Church, and served as a Knight of Columbus, helping with the senior community. Funeral mass and interment with military honors will be private due to the pandemic. In lieu of flowers, memorial contributions may be made to Our Lady of Mount Carmel Catholic Church in Fairfield, California or to the American Cancer Society.

Gerhard Karl Berger passed away peacefully at his home on January 4, 2021 after a brave battle with lung cancer at age 86. He lived a full life as a loving husband, father, and grandfather. Gerhard was born to Karl and Maria (Kubessa) Berger... View Obituary & Service Information

The family of Gerhard Karl Berger created this Life Tributes page to make it easy to share your memories.

Gerhard Karl Berger passed away peacefully at his home on January...

Send flowers to the Berger family.