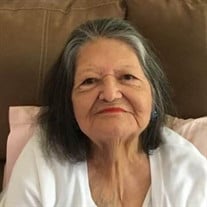 GLORIA HOUSTON Nov. 7, 1935 - March 29, 2020 Gloria Benita Houston, loving wife and mother of eight girls went to be with the Lord on Sunday, March 29, 2020, at the age of 84. Gloria was born on Nov. 7, 1935 in Oakland, California. In February of 1951, she met the love of her life, George Houston in Vallejo, California with whom she’d spend the rest of her life with. They were married on Dec. 12, 1951. Together, they raised their eight girls. Gloria enjoyed many things. She loved the Lord, church and she was a prayer warrior. She was a great cook, never having to measure when she was making a recipe. She was well known for her delicious cinnamon rolls, mac and cheese and many other amazing recipes. Gloria was well loved by all who knew her, she was very kind and generous. She is survived by her husband, George Houston; their eight daughters, Susan (Jim) Sluder, Debbie (Tom) Sluder, Betty Peig, Gail Houston, Tammy (Tom) Hanson, Norma Dionne, April (Paul) Giannetti and Shirley Houston; 17 grandchildren; and 23 great-grandchildren. Gloria was preceded in death by her father and mother. Services will be private. Arrangements under the care of Fairfield Funeral Home, 707-425-1041.

The family of Gloria Benita Houston created this Life Tributes page to make it easy to share your memories.

Send flowers to the Houston family.