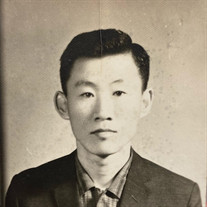 Hak Soon Yoo (August 22, 1936 – August 2, 2021) Hak Soon Yoo passed away on Monday August 2, 2021 at the age of 85. Hak Soon died peacefully with his wife of 62 years, Yung Soon, by his side. Hak Soon was born in South Korea on August 22, 1936. He was the 2nd youngest of 7 children. Hak Soon didn’t have the opportunity for much formal education. He helped out on his family’s farm and worked any odd jobs he could starting at an early age. His work ethic and desire to take care of his family was developed during these early years. In 1957, a few years following the end of the Korean War at the age of 21, Hak Soon, began his mandatory enlistment in the Korean Army. Hak Soon, was chosen as part of a select few for the KATUSA (Korean Augmentation to the United States Army) acting as a liaison between South Korea and the United States. The minimum enlistment period is 18 months, but Hak Soon remained enlisted with the KATUSA for 4 years. Following the military, Hak Soon returned home to continue creating a life for his wife and young family. He worked tirelessly & selflessly saving every penny with dreams of providing opportunities for his growing family. In 1973, with 4 small children, Hak Soon and Yung Soon, bravely emigrated from South Korea to the United States. In 1979, Hak Soon and Yung Soon became business owners opening You’s Burgers (1979-1994). This humble small business provided just about everything the family of 6 needed. The American Dream personified. Hak Soon was preceded in death by his parents, siblings, and granddaughters Christina and Diana. Hak Soon is survived by his wife Yung Soon; children Dong, Soen, Seon, and Don; grandchildren Alexander, Christian, Tyler, Stephen, Nicole, Natalie, Rechelle, Max, and Aodhan. Although the family is saddened by Hak Soon’s passing, please join them in celebrating his life. People wishing to honor Hak Soon should embrace his legacy, which exemplified honesty above all else.

The family of Hak Soon Yoo created this Life Tributes page to make it easy to share your memories.

Send flowers to the Yoo family.