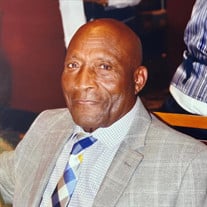 James (Jim) Edward Brown age 86 of Fairfield California, passed away on Thursday, July 23, 2020, at NorthBay Medical Center in Fairfield, California. James was born in Neyles Crossroads, South Carolina on November 1, 1933 He is preceded in death by former wife Sheila (Maguire), the mother to his three children; she passed away in 1983 after a long bout with breast cancer. Also, his parents, father William and mother, Eleise. He is survived by; Loving Wife Virginia Brookins Brown, daughter Sharon (Maurice) Patterson, son Raymond (Stefan) Brown, daughter Denise (John) LeMelle, six grandchildren Monique, Dominique, Marques, Denzel, Sebastian, and Gabriella eight great-grandchildren Dae’jon, Lexianna, Amari Jayden, Denzel, Jordan, Ava, and Kyion. Along with his sister Willie Mae Barnes and brother Daniel Wright and his extended English and South Carolina family. During his lifetime, Jim served in the Army and Air Force for 20 years. He served in both the Korean and Vietnam conflicts. In addition to his stateside assignments, during his military/diplomatic service, he was stationed in Turkey, Germany, and England. After retiring from the US Air Force in 1977, he relocated to Solano County, California. There the family put down roots for a new adventure in life. Jim worked for Owens-Illinois as a plant manager for 15 years. After retirement, Jim stayed very busy. He worked out daily, enjoyed riding bikes, and tending to his beautiful garden. He loved his two cats Rascal and Daisy, which were the source of much joy. A highlight of his free time was spending time with his grandkids and great-grandkids who affectionately called him Popa Brown and PoppaCorn. Jim was a die-hard 49er fan no matter how bad they were doing! He loved jazz concerts and a good glass of wine. He loved having friends and family over and was known for his delicious Barbecue but most of all for his beautiful kind and loving spirit. He will be forever loved and missed. In place of flowers the family request that you give to one of the following causes that Jim felt strongly about PAWS https://www.paws.org/donate/ , Southern Poverty Law Center https://donate.splcenter.org/ A “Celebration of Life” service will be announced at a later date.

The family of James Edward Brown created this Life Tributes page to make it easy to share your memories.

Send flowers to the Brown family.