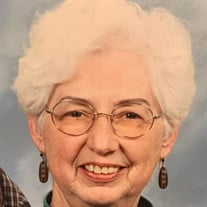 Jean Ann Dolter 1936-2021 Jean Ann Dolter of Fairfield, CA died on Monday morning, December 27, 2021 after a long battle with dementia. She was born on October 22, 1936 in Detroit, MI to William and Grace Cofell. She and her younger sister Mary, spent their entire childhoods in Detroit. Jean graduated with a Bachelor of Science degree from the University of Michigan at Ann Arbor. Following graduation, Jean and a college friend travelled out west, settling in San Francisco. She initially worked as a medical technician for the University of California San Francisco Hospital. In 1960 she met her future husband, Bill Dolter at church in San Francisco. They married on June 17, 1961, a union that would last until her death, over 60 years later. Jean and Bill raised two sons, eventually moving from San Francisco to Oakland and finally to El Cerrito in 1964. As the boys grew older, Jean went back to college, attending the California State University Hayward. She then worked for several years as a microbiologist for the California State Department of Health Services in Berkeley until she retired. After retiring Jean volunteered as a docent for both the Oakland Museum and the Solano Land Trust at Rush Ranch. During their retirement Jean and Bill travelled extensively throughout the United States and abroad. Jean is survived by her husband William Dolter of Fairfield, CA; sons James Dolter (Karen and their son Nicholas) of San Diego, CA and Thomas Dolter (Senne and their children, Joshua, Danny, and Gabby) of Benicia, CA. She is also survived by her nephews and niece, Scott Veenstra, Bruce Veenstra (Julie), and Elizabeth Veenstra and her daughter Grace. Jean was preceded in death by her parents, her sister Mary Veenstra and brother in law, Charles Veenstra. Jean’s ashes will be interred at the Sacramento Valley National Cemetery in a private family service. In lieu of flowers, donations may be made to the Alzheimer’s Association, (Alz.org) or the charity of their choice.

Jean Ann Dolter 1936-2021 Jean Ann Dolter of Fairfield, CA died on Monday morning, December 27, 2021 after a long battle with dementia. She was born on October 22, 1936 in Detroit, MI to William and Grace Cofell. She and her younger sister Mary,... View Obituary & Service Information

The family of Jean Ann Dolter created this Life Tributes page to make it easy to share your memories.

Send flowers to the Dolter family.