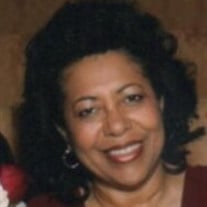 Jessie Ophelia Gibson It is with profound sadness that the family of Jessie Ophelia Gibson announces her peaceful passing at home on Sunday, September 6, 2020, at the age of 77. Born Jessie Ophelia Smith in Shreveport, Louisiana, Jessie was the second child of Margaret Daniels Smith and Edward Leon Smith. Baptized at Our Lady of the Blessed Sacrament Church, she attended the school of the same name throughout her elementary and middle school years. She was an accomplished soprano singer and upon graduation from Booker T. Washington High School in 1961, was recognized in “Who’s Who Among Student Leaders in High Schools of America.” Her scholastic achievements and ability to work collaboratively with others at Grambling State University were noticed by members of the Delta Iota Chapter of Delta Sigma Theta Sorority, Inc. and she was invited to pursue membership. She was inducted into the organization in 1963 and served as the chapter’s financial secretary. After being awarded a Bachelor of Science degree in Secondary Education in 1965, she began a career in language arts education. Encouraged by inner-city teaching opportunities in the west, she relocated to the San Francisco Bay Area and became an instructor at Helms Middle School in San Pablo, California, in 1969. At Helms she met fellow teacher, Edwin Gibson and they married in February 1970 at St. Columba’s Catholic Church in Oakland, CA. Together they established homes in Richmond, Hercules, Vallejo, and finally, Fairfield, CA. Their daughter, Cherilyn D. Gibson, born in 1976, pursued a degree from the University of California at Berkeley. Their son, Gregory R. Gibson, born in 1980, served in the 101st Airborne Division of the United States Army. Jessie’s career in education spanned from 1965-2000 when a then 20-year battle with Multiple Sclerosis forced her into retirement. In her post-teaching years, she enjoyed the company of family and extended family, all things classically western, and the devoted study of the Catholic faith. She will be forever missed for her fervent storytelling, infectious smile, quick wit and profound impact on generations of Bay Area youth. Jessie was pre-deceased by father, Edward and mother, Margaret, sister, Carolyn A. Lee and brother, Ronny L. Smith. Her memory will be cherished by her husband of 50 years, Edwin Gibson, daughter, Cherilyn Gibson Lewis, son-in-law, Ivan Lewis, son, Gregory Gibson, sister, Janette M. Smith, grandchildren Gregory and Ethan Gibson, and a host of family: Smiths, Daniels, Gibsons, Lewises and friends.

The family of Jessie Ophelia Gibson created this Life Tributes page to make it easy to share your memories.

It is with profound sadness that the...

Send flowers to the Gibson family.