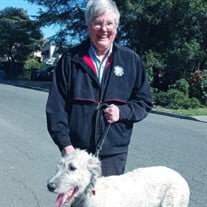 John DeHaan of Vallejo CA left this earthly home on Saturday, May 7, 2022. He is now in that eternal space where there is a challenging auto race course that rests next to an elaborate model train layout and an enormous dog run where he will watch the fur babies romp freely. He will also assure there is no fire as he will educate everyone on the dangers of fire. John was born in Chicago, IL to Peter and Honore (Martin) DeHaan on 13 August 1948. John is survived by his sister Shirley (DeHaan) Anderson and sister-in-law Jeanne (Pociecha) DeHaan McCarthy, nieces, nephews, cousins, and scores of close friends worldwide. He was preceded in death by his parents, his brothers Norman R. DeHaan and Fred Busse DeHaan, his grand-nephew Erik J. Collette, his cousin and close friend David Martin, and many other loving souls. John had a lifelong quest for success. As a child he was found training his pet rodent to type his name on a typewriter. That determination followed him his whole life. He thrilled at the science of solving the mystery of fire, crime and mayhem. His expertise, and systematic and methodical approach, in fire- and explosion-related forensic science made him a most sought after private consultant. He accepted investigative cases in the U.S., Canada, Australia, New Zealand and the U.K. He authored books on fire investigation and published his research in many fire and forensic publications. John also earned numerous awards for his contributions in arson investigations, fire investigation and criminalistics. When John had down time he loved working on his many unique antique cars, racing some of them on various circuits. He enjoyed collecting model trains and making friends with other hobbyists who shared his passion. Another of John’s favorite things in life were his Irish Wolfhounds, Greyhounds, rescue and other dogs. John was incredibly blessed with amazing friends and fellow conspirators who shared his adventures in life. Neighbors and co-workers were drawn in by John’s enthusiasm, positive and upbeat personality, his infectious laugh and overall kind character. John quested the Joy of Discovery and shared that joy with everyone he encountered. Needless to say, he will be sorely missed. Interment will be private. Please remember John by supporting fire and law enforcement communities as well as your local dog rescue organizations.

John DeHaan of Vallejo CA left this earthly home on Saturday, May 7, 2022. He is now in that eternal space where there is a challenging auto race course that rests next to an elaborate model train layout and an enormous dog run where he will... View Obituary & Service Information

The family of John David DeHaan created this Life Tributes page to make it easy to share your memories.

Send flowers to the DeHaan family.