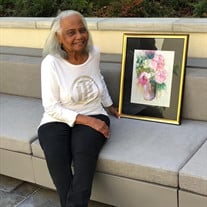 Lanita Chambers Parnell, 77, passed away peacefully in the late night of August 23, 2021, at Kaiser Permanente South Sacramento Medical Center in Elk Grove, California. Lanita battled extensively with a plethora of terminal health issues. Lanita was born on June 25, 1944, in Jackson, Mississippi to the late Isaiah, Jr. and Inez Chambers. Lanita grew up in San Francisco, California. Lanita graduated from Polytechnic High School in San Francisco, California in 1962. After high school, Lanita had her first child, Tracey. Following, Lanita worked for the San Francisco Post Office as a Mailroom Clerk, where she met her soon to be husband. In 1967, Lanita married General H. Parnell III, in San Francisco, California. They were happily married for 20 years. In San Francisco, Lanita and General had two sons; David and Daniel. Following, Lanita and family moved to Fairfield, California and proceeded to have two more children; Darius and DeJon. While residing in Fairfield, Lanita worked as a Secretary for Solano County. Lanita enjoyed being the wife of a band member, where she would make their costumes, travel, and cook for the band members. In addition, Lanita loved contemporary art and fine art including watercolor painting, acrylic painting, oil painting, drawing, photography, ceramics, and sculptures. Lanita idolized the legendary Gary Jenkins, who is famous for his outstanding floral art paintings. When Lanita was in her artistic realm in front of her easel, you could find her listening to the legendary Tina Turner, Jimi Hendrix, or smooth jazz while enjoying a glass of sparkling wine. Furthermore, she loved to cook for her family, was a dedicated mother and grandmother, and enjoyed playing jokes on her children. Her laugh was contagious and everyone who knew her, loved her. Lanita cherished her family and enjoyed quality time with her siblings, nieces, and nephews. In 1997, Lanita, along with her two daughters; Tracey and DeJon, and granddaughter, Tranae, moved to San Diego to prosper and embrace a beautiful new beginning. Lanita’s son, David, resided in San Diego earlier on and later, Daniel and Darius would follow. Lanita and family resided in San Diego for 24 years. Lanita attended San Diego City College where she received an associate degree of Fine Arts in 2009. Lanita would go on to pursue numerous artistic opportunities, receiving acknowledgement and recognition for her outstanding artwork in art galleries, contests, and murals. In 2015, Lanita was diagnosed with Lung Cancer, which would be the beginning timeline of terminal health issues. In 2016, Lanita participated in Relay for Life of Vacaville on Team Hero’s, created by her granddaughter, Tranae. In 2018, Lanita received a Wish of a Lifetime which included a personalized painting from Gary Jenkins, along with his workshop instructional videos, paints, and tools, where she would have the opportunity to recreate one of his works. This was a monumental moment in her artistic career. In late 2020, Lanita moved back to Northern California with her son, Daniel, due to declining health issues, where her daughter Tracey, now Tia, Daniel, and granddaughter Tranae, would help care for her until she left this world peacefully. Lanita is survived by; her five children; Tia Chavis (Tracey), David Parnell, Daniel Parnell, Darius Parnell, and DeJon Parnell, her brother; Cardell Dunn, sisters; Renee Dunn and Cheryl Dunn, granddaughters; Tranae Shoopman and Alana Parnell, and her beautiful nieces and nephews and other relatives. Lanita was preceded in death by her parents, Isaiah, Jr. and Inez Chambers, sisters; Olivia Chambers Lee and Ina Chambers Eddy, and brother; Michael Dunn. A viewing will be held at Fairfield Funeral Home, 1750 Pennsylvania Ave, Fairfield, California at 4:00 p.m. to 7:00 p.m., September 16, 2021. A Celebration of Life will be held at Phoenix-Alameda, 2315 Lincoln Ave, Alameda, California at 1:00 p.m. to 6:00 p.m., September 18, 2021. The family encourages friends and relatives to join. Condolences may be left on Lanita Parnell’s online guest book at: https://www.fairfieldfuneral-home.com/obituaries/Lanita-Parnell/

The family of Lanita Parnell created this Life Tributes page to make it easy to share your memories.

Lanita Chambers Parnell, 77, passed away peacefully in the late...

Send flowers to the Parnell family.