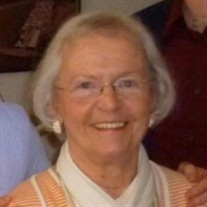 Margaret Engel Brockhouse passed away at 96 in Fairfield, CA on December 29, 2021. Maggie, as she was called, began life in Chicago, IL but during the Depression era the family moved to Fairbury, a beautiful old Illinois farm town. The family returned to the “Windy City” for Maggie’s high school years, followed by four years at the University of Illinois where she joined the Gamma Phi Beta sorority. Thereafter, Maggie’s urge to travel and see the world became irresistible. United Airlines hired her as a stewardess, paid her to fly in their DC-3’s and 6’s, and based her in San Francisco. One year later, her stewardess wings were clipped when she said “yes” to a marriage proposal from Jack Brockhouse. They chose Bakersfield as the ideal place to start a farm irrigation business and also a home for a family. Maggie’s number one career was as wife, mother, and homemaker. But her strong desire for community involvement led her to join Junior League, AAUW, a Gamma Phi Beta alumnae chapter, and 1st Presbyterian Church. Both she and Jack loved their evening bridge groups. She also discovered she had a passion for politics and spent years volunteering in a wide variety of ways for local politicians. In 1980, the Brockhouses became country folks with a 100-acre, hilly walnut ranch near Paso Robles. They built their craftsman style, dream home on a hilltop with expansive views out every window. Again, community involvement was a priority, especially the San Luis Obispo Symphony Guild. In 2003, Maggie and Jack moved to Paradise Valley Estates in Fairfield, CA for a more relaxed retirement life amidst a swirl of social opportunities. Throughout the years, she was able to continue indulging her insatiable urge to travel. Maggie was predeceased by husband Jack. She is survived by her three daughters Beth Brockhouse, Melinda Gardner (Don), and Ellen Hickle (Bob); four grandchildren Sam Gardner (Kira), Jake Gardner (Kate), Johanna Hickle, Elliot Hickle and great-grandson Julian Gardner. Memorial donations in Margaret’s name can be made to: - Mondavi Center for the Performing Arts - Vitas Hospice https://vitascommunityconnection.org

Margaret Engel Brockhouse passed away at 96 in Fairfield, CA on December 29, 2021. Maggie, as she was called, began life in Chicago, IL but during the Depression era the family moved to Fairbury, a beautiful old Illinois farm town. The family... View Obituary & Service Information

The family of Margaret Brockhouse created this Life Tributes page to make it easy to share your memories.

Margaret Engel Brockhouse passed away at 96 in Fairfield, CA...

Send flowers to the Brockhouse family.