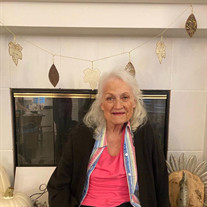 Marilyn P. Sanders 1938-2021 Marilyn, 82, passed away peacefully in her sleep at her home of natural causes early in the morning of November 21, 2021. She went to be with her sweetheart William Dexter Sanders who was waiting to greet her along with her brother, parents, daughter- in- law along with many other friends and relatives. Marilyn was born on Christmas day 1938 in Logan, Utah. She loved to tell us the story of the night she was born; her mom said it was so peaceful and you could hear Silent Night playing in the background. People often asked her if she felt slighted that her birthday was on Christmas to which she always answered “NO, I love it! It is a time that everyone is happy, usually off work and families gather.” Marilyn grew up in Smithfield, Utah on a dairy farm. She attended Utah State University where she met her husband of 55 years on a blind date. They were sealed for time and all eternity, on July 27, 1960 in the Logan Utah Temple. Shortly after getting married, Dexter joined the U. S. Air Force. Being an Air Force wife, she had the opportunity to live in a few different places in her life. Not as many as some in the military but still, they lived in Texas, Utah, Germany and California. To say Marilyn was a people person would be an understatement! She always said she never met a stranger and would always converse with a person until they came to some kind of connection. Genealogy was a top priority for Marilyn. Keeping records of family names, dates, accomplishments etc. was a passion. Marilyn served in numerous positions in The Church of Jesus Christ of Latter-Day Saints; she put her whole heart into everything she did. Working with the scouts for many years as a den mother was one of her favorites. This kept her busy, along with the bonus of working with her own three sons. Working with the women of her church was done on and off her whole life. She could often be found teaching a class on food preservation or working at fund raising bazars to raise funds for buildings for her church. Never was there an idol moment, she wasn’t afraid of work. She had a few jobs outside the home including working at Leatherby’s creamery, Firehouse deli (which she owned with her husband and their dear friends the Carlson’s) and Green Valley Country Club. As with everything she did she always went the extra mile at her jobs to make everyone happy, satisfied and feel comfortable. Family was extremely important to her. You could always find some grandkids at her home. She liked to care for them and feed them, especially the feeding part! Marilyn was blessed with 5 children: Shellie Jensen, Jamie Sanders, Scott Sanders, Jared Sanders and Sherrie Sanders. She has 20 grandchildren and 19 3/4 great grandchildren. Marilyn definitely left her mark on the world and will be missed! One of her favorite sayings was: “I never met a stranger, everyone is my friend.”

Marilyn P. Sanders 1938-2021 Marilyn, 82, passed away peacefully in her sleep at her home of natural causes early in the morning of November 21, 2021. She went to be with her sweetheart William Dexter Sanders who was waiting to greet her along... View Obituary & Service Information

The family of Marilyn P Sanders created this Life Tributes page to make it easy to share your memories.

Send flowers to the Sanders family.