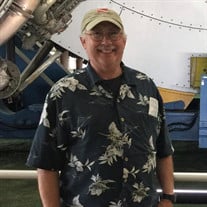 Mark Scott Benker - May 04, 1956 – September 15, 2020 Mark was born in Walnut Creek, California, as Mark Scott Ours, where he spent most of his early life. He developed a love for scuba diving at the young age of 12, and by the time he was 14 he was a certified scuba instructor. Scuba diving remained a life-long passion for Mark and was the subject of many his adventures. In November 1973, at the age 17, Mark left home and joined the United States Army. It was at this time that he decided to officially change his name to Mark Scott Benker, in honor of his step-father, Robert Benker. Shortly after enlisting he was stationed at Fort Bragg, North Carolina, where spent most of his military career. Six months later he completed the Airborne Course, received his diploma, and joined the 82nd Airborne Division. During his time in the 82nd he successfully completed over 100 jumps. In October of 1975 he completed Jungle Warfare Training and was designated a “Jungle Expert”. He was then sent to Panama, where he had to sleep in trees and even developed jungle foot rot. Mark completed his service in mid-November of 1976. After his time in the Army, he joined the National Guard, as a member of the 570th Military Police, where he spent two years until he was honorably discharged in November 1979. Outside of the military, Mark had a brief career as a licensed real estate broker in 1977. After that, he worked in sound system installation, installing speakers and other equipment in movie theaters around the Bay Area. He also spent many years working with his step-father, Robert Benker, in the “Benker’s Refinishing” business where he learned to refinish Pianos and other furniture. In 1985 Mark got a job as an operator at the Shell Oil Refinery in Martinez California. While there, he spent many years on auxiliary fire crew, and enjoyed trips to the Reno Fire School. He eventually worked his way up to shift team leader and worked there for 30 years until his retirement in 2016. During his retirement, he liked to spend his time driving and occasionally racing his beloved Miata. He spent some time on the track at both Sonoma Raceway and the then Mazda Raceway in Monterey California. It was at Laguna Seca, on April 1, 2016, where he got the opportunity to race his white Miata, number 62, amongst hundreds of others racing their cars around track. It was a great day. In February of 2018, Mark and his wife Susan purchased a Heartland Big Horn 5th wheel RV and decided to tour the nation. They started in California and traveled the southern United States passing through Arizona, New Mexico, Texas, and eventually to Florida. On their way back, they headed North up the East coast as far as New Jersey and Pennsylvania before heading back home to California. Mark was much loved for his kindness, funny sense of humor and his ability to always make you laugh. Mark is survived by his wife of 38 years, Susan Benker and by his daughters Sandra Boyle of Black Mountain, North Carolina and Sarah Benker of San Jose, CA. Mark is also survived by his brother Karl Lucas Ours, of Pine Grove, CA, and his sisters Michelle Betz of Pioneer, CA, and Doranna Benker-Gilkey of McKinleyville, CA. A memorial service will be held for Mark at the home of Susan Benker at 1132 Gannet Court, Fairfield, Ca. 94533 on Saturday October 3rd, 2020 at 1:00 P.M. All are invited and covid-19 masks will be provided.

The family of Mark Scott Benker created this Life Tributes page to make it easy to share your memories.

Send flowers to the Benker family.