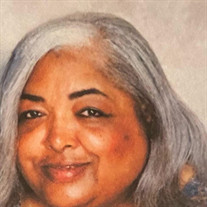 Mary Kilpatrick Ransfer, age 80, went home to be with the Lord on September 29, 2021. She was born of the union of Alice and Jerry Kilpatrick, both preceding her in death. Mary accepted Christ at an early age and was baptized at Mount Olive Baptist Church in Jackson, Alabama. While attending Blount High School in Prichard, Alabama, she met and married the love of her life, James (Percy) Ransfer and joined Macedonia Baptist Church, where she actively served the church. Mary would continue her high school years and graduate from Cedar Grove Academy in Prichard, Alabama. After the birth of their first child, Mary began her U.S. and world travel journey with James who served in the U.S. Air Force, beginning in Orcutt, California. After moving to Fairfield, California, she joined First Baptist Church. She would enter the medical field by attending and graduating as a Nursing Assistant from Armijo Adult School. She attended Solano College, and then went on to pursue her Licensed Vocational Nurse (LVN) by challenging and passing the State Board. She started her career at Suisun Valley Manor in Fairfield and Winsdor House in Vacaville. She was very active in the Service Employees International Union (SEIU) Local 250, and served as a Union Steward defending the interests of her fellow employees. Mary’s career took her to places around the U.S. and the world, such as Bothwell Memorial Hospital in Sedalia, Missouri; Landstuhl Medical Center in Kaiserslautern Germany; Gulf Coast Community Hospital in Gulfport, Mississippi; Broadway General, Kaiser Permanente and Sutter Solano in Vallejo, where she retired after 35 years of nursing. She loved to care for her patients and worked tirelessly to ensure they received the best of care. She raised her three children, while James was stationed overseas. Mary enjoyed international travel to places such as Rome (Coliseum), Catania (Gucci Factory), Pisa (Leaning Tower), Florence, Italy; Ramstein and back to Kaiserslautern (visit friends), Germany; Paris, France (Eiffel Tower); Madrid, Spain and Munich, Germany. Mary loved to camp with the family or just her husband in her 32-foot Allegro Bus. However, she also enjoyed traveling to timeshare locations in California, Washington, Oregon, Kentucky, Missouri, Mexico, Australia, and Fuji. This was to continue upon retirement, but being on dialysis limited her to Alabama, Nevada, and California. She served as Daughter Ruler of Victoria G. Francis of Temple No. 1244. Mary was also an avid bowler with many trophies to show for it! She is survived by her wedded husband of 64 years, James; children Calvin Ransfer, Sanja Ransfer Smith, and Marcel Ransfer; sister Jerrie Kilpatrick, niece Michelle Kilpatrick, grandchildren Shalanee' Ylan Smith, Sahni Y'Kasa Smith and T'Kai Avi Smith, great granddaughter Mulan Keiko Harrington and a host of other relatives and friends. Mary was preceded in death by her brothers, Rev. Bennie Ray Kilpatrick and Marchell Lee Kilpatrick. Those wishing to honor her life may make a donation in her name to the American Cancer Society, Red Cross or a charity of your choice, in lieu of flowers. ~Earth has no sorrow that Heaven cannot heal~

Mary Kilpatrick Ransfer, age 80, went home to be with the Lord on September 29, 2021. She was born of the union of Alice and Jerry Kilpatrick, both preceding her in death. Mary accepted Christ at an early age and was baptized at Mount Olive... View Obituary & Service Information

The family of Mary Kilpatrick Ransfer created this Life Tributes page to make it easy to share your memories.

Mary Kilpatrick Ransfer, age 80, went home to be with the Lord...

Send flowers to the Ransfer family.