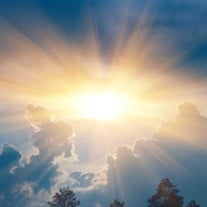 Shirley Patricia Williams was born to the late James and Cornelia Perry Williams on March 13, 1939 in Portsmouth, Virginia. The sixth of fourteen children, she delighted in helping her mother by assisting with her younger siblings and cleaning the house. Shirley also enjoyed singing. During her teen years, Shirley sang and travelled with the Truelight Gospel Singers. She was a graduate of I.C. Norcom High School and had the pleasure of attending her 47th Class Reunion in 2006. Shirley met the late Tommy Lee LaGrone while he was stationed at the local naval base. After a notably brief courtship--which included younger siblings accompanying them on dates--Tommy proposed to her father and they were married on April 27, 1959. Shirley always joked that she was still waiting for him to propose to her. While Tommy was completing his tour, Shirley lived with her inlaws in Marshall, Texas. The couple relocated to San Francisco, California in 1960. The LaGrones had seven children--including two sets of twins and a stillbirth. Shirley kept busy as a “home manager” raising four children under the age of five while Tommy both worked and attended college full-time. Knowing that Shirley was a good partner, allowed Tommy to pursue his business interests. After the children were grown, Shirley worked alongside her husband as a parttime Administrative Assistant at LaGrone’s Insurance Agency. She retired in 2002. “Her husband had full confidence in her. He called her blessed and praised her.” (Proverbs 31:11,28) Shirley was family-oriented. She often referred to the large family she came from and prided herself in taking care of the one she and Tommy had created. She helped to instill a sense of cultural pride and a positive self-image in her children; nurtured their creative minds; taught them the importance of good manners and table etiquette--as well as the value of respecting others and showing kindness. Shirley rarely missed an opportunity to support activities involving her family. In maintaining her home, she had great organizational skills and a natural knack for dressing up a room. When reminiscing about their childhood, one of her sisters described Shirley as always having a bubbly personality. This trait remained consistent throughout her lifetime. Shirley enjoyed laughing and loved a good round of bantering. She was exceptionally friendly. Shirley often knew the staff at various business venues by first name. Her welcoming nature made others feel comfortable. She was this way with her children’s friends also--welcoming newcomers with warmth and humor. She literally never knew a stranger. Shirley was very wise and perceptive. She counseled many young women and men throughout her lifetime. In a recent recorded message to her grandchildren, Shirley advised them to “Treat your friends like family and your family like friends.” She has lived out these words--maintaining numerous friendships for 50 plus years. Shirley’s parents were her first spiritual role models. She accepted Christ at an early age and was a member of Noble Street Baptist Church in Portsmouth--along with her family. After relocating, Obituary Shirley was a member of various churches in the Greater Bay Area--including Neighborhood Baptist Church in San Francisco. She has been a member of Shiloh Baptist Church in Vacaville since 2009. Shirley was also a regular attendee of The Pact weekly bible study. Shirley was preceded in death by two children: Kenneth and Stacey; six siblings: Helen Smith, Alice “Sister” Mackey, Selena “Mae” Donaldson, Kathryn “Marie” Phillips, Brenda Dyson and Ronald Williams; god-siblings: Sadie Peterson and Reverend Alfred Wright; and grandson, Vincent Wilson II. She will lovingly be remembered by her children: Kevin “Kheven” LaGrone, Regina Wilson (Vincent), Renata LaGrone-Phillips (Firdi), Kurtis LaGrone (Sandy) and Keith LaGrone; nine grandchildren: André and Anthony Wilson; Jarrel, Jason and Javon Phillips; Taisia LaGrone, Jayde LaGrone, Nadiya Kamara and Foday Kamara (Sheela); four great grandchildren: Ky-Mani Bell; Carter Davis; Adriel and Korey Wilson; eight siblings: James “Bobby” Williams (Carrie), Barbara “Jean” Brooks, Sharron Rawls (James), Janice Brown, Wilbert “Kent” Williams (Annette), Bruce “André” Williams and Marian “Renee” Harrison (Clarence); in-laws: Gloria “Dean” Easley and Rose Lister (Rayford); goddaughters: Brenda Saulsberry, Toni Powell and Tamara Ratcliff; sister-friend, Cherie Patton; the Brown Family; a host of nieces, nephews, cousins, friends and the Shiloh Baptist Church Family. On April 13, 2021, Shirley was laid to rest beside her beloved husband at the Sacramento Valley National Cemetery.

Shirley Patricia Williams was born to the late James and Cornelia Perry Williams on March 13, 1939 in Portsmouth, Virginia. The sixth of fourteen children, she delighted in helping her mother by assisting with her younger siblings and cleaning... View Obituary & Service Information

The family of Shirley Patricia LaGrone created this Life Tributes page to make it easy to share your memories.

Shirley Patricia Williams was born to the late James and Cornelia...

Send flowers to the LaGrone family.