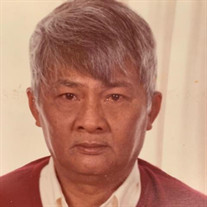 On the morning of July 16, 2021, Silverio died peacefully of natural causes. Silverio was being visited and comforted by his two sons at his home in Fairfield, CA at the time of his passing. Silverio was 89 years old. Silverio was born in Binakayan, Kawit, Cavite, Philippines on March 5, 1932. He was the third son out of seven children to Silverio Miranda, Sr. and Marina Mendiola. Silverio grew up in the Philippines during World War II. Barefoot, and during wartime, as a young boy Silverio made the long walk to attend school. He loved to learn. As a welder in Guam, Silverio was skilled at building with iron and steel. He brought his craft home by building playgrounds of small swings, slides, and seesaws for his two daughters. Silverio also used his skills on home improvement projects, an interest that he passed on to his son, Dave. He was resourceful and never wasted a piece of material; he measured one thing over and over again to make sure he had it exactly right before moving on. Silverio could not be rushed - he took his time to do it the right way. His home improvement was not limited to construction, though, as Silverio loved to garden. Roses were his favorite; at one point, thanks to his hobby his home was completely adorned with and surrounded by big, beautiful roses. Silverio was quick to laugh and to crack a good joke, even at his own expense. He loved baseball, reading, and travelling. When Silverio sat down for a meal, you could bet that on his plate would be pork, his favorite, and definitely not fish - and that he would be the one to empty his plate the fastest. An avid and devoted church member, Silverio counted his blessings. Every week, without fail, he attended mass, and every week, without fail, he gave the exact same amount to the donation basket. Silverio was preceded in death by his wife, Emelita Tolentino Miranda, and his great-granddaughter Silleah Eve Panis. Silverio is survived by his children Maria Liza Alvarado, Jesusan Miranda De Leon, James Tolentino Miranda, and Dave Tolentino Miranda; his grandchildren Sill Homer Panis, Alyssa May Panis, Emmercelle De Leon Hernandez, Darien Lambert De Leon, Jesan Aubre De Leon, David James Del Rosario Miranda, Izabella Villajuan Miranda and Iziella Villajuan Miranda; and his great-grandchildren Elonzo Sean Panis, Ellison Sedrick Panis, Emmy Luna Hernandez, Antonio Jun Sol Hernandez, and Mayla Wynn Carver. Funeral arrangements will be held on July 28 & 29, 2021 at Fairfield Funeral Homes. The viewing will be held on Wednesday, July 28, 2021 from 4:00-7:00pm. The funeral will be held on Thursday, July 29, 2021 from 11:00am-12:30pm.

On the morning of July 16, 2021, Silverio died peacefully of natural causes. Silverio was being visited and comforted by his two sons at his home in Fairfield, CA at the time of his passing. Silverio was 89 years old. Silverio was born in... View Obituary & Service Information

The family of Silverio Mendiola Miranda Jr. created this Life Tributes page to make it easy to share your memories.

Send flowers to the Miranda family.